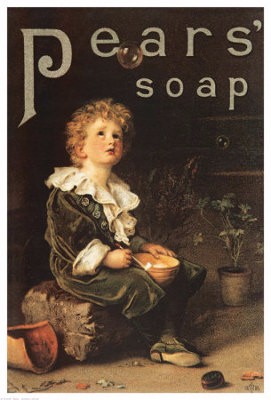 In 1865, Thomas J Barratt, helped run his father-in-law’s company, Pears’ soap. He is considered “the father of modern advertisement”, and he knew how important it was to evoke emotion with imagery and copy. Barrett got Sir John Everett Millais’, the most successful English artist during the late 1800’s to give Pears exclusive rights to use his paint ‘Bubbles’ as an ad for Pears.

That proved to be very savvy as Pears’ “Bubble Campaign” is one of the most recognizable ad cacamaigns of all time. Barrett also understood the power of testimonials convincing super star Lillie Langry to appear in ads and paying physicians and pharmacists to give testimonials. Barrett built the foundation for a brand that is still around today. 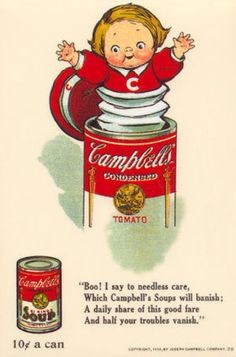 The first Campbell Kids were drawn by Grace Drayton, a children’s book illustrator and staff artist for the Philadelphia Press and Evening Journal. Her husband, recommended her services to Campbell since she had been drawing little kids with round faces and rosy cheeks for years.

She adapted her drawings for Campbell and they became a phenomenon. The Campbell kids humanized the product and created a powerful brand recognition. They appeared on nearly every ad Campbell ran and were so popular that toy companies fought to win the rights to manufacture the wildly popular Campbell Kids dolls. 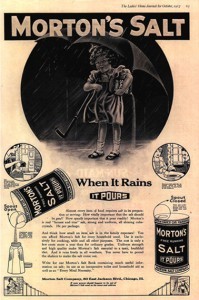 Morton Salt added an anti-caking agent to it’s salt so that it would pour more freely. At that time most salt would clump when the weather was too humid. The company wanted to tell consumers that this salt would pour freely, even in damp weather. The original pitch was “Even in rainy weather, it flows freely,” but they finally got to the perfect tagline: “When it rains, it pours.” 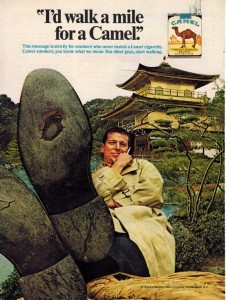 These ads built on an old promotional campaign by ‘Old Joe’, a circus Camel driven through town to promote free cigarettes giveaways.

The camel ads featured a cool guy, relaxing with his feet up, showing off his worn shoe and declaring. was “I’d walk a mile for a Camel!”

Sanka, Sanka—everything you love about coffee – 1927 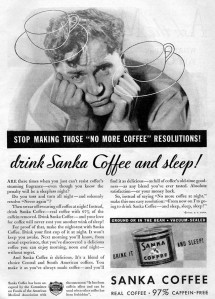 General Foods made Sanka a household name in the U.S by spending aggressively on advertising, including the sponsorship of top shows like CBS’ The Goldbergs, where protagonist Molly Goldberg talked about Sanka through a window.

Sanka, long sold as “97 percent caffeine-free,” became a a generic term for decaffeinated coffee. A request at a restaurant for “a decaf” would get you a cup of Sanka poured from a pot with an orange handle. 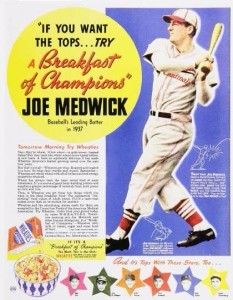 Wheaties first started sports promotion in 1927, with an ad on a wall of a minor league baseball team in Minneapolis, Minnesota. Wheaties sponsored the radio broadcasts and had a large billboard in the park to introduce new slogans. The first slogan on the new signboard was penned by Knox Reeves. When asked what should be placed on the billbaord, Reeves sketched a Wheaties box, thought for a moment, and wrote “Wheaties-The Breakfast of Champions”. Wheaties used that concept effectively and its brand has been strongly associated with sports since then. In the 1939 baseball All-Star Game, 46 of the 51 players endorsed the cereal. The brand has featured hundreds of famous athletes and its ads are still used today. 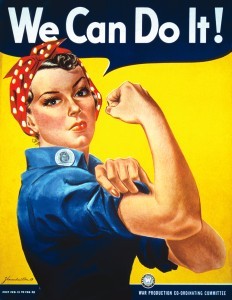 This poster was created by artist J. Howard Miller and initially only seen by workers in Westinghouse factories. The slogan “We Can Do It!” actually had nothing to do with “Rosie the Riveter” at first and was a series of paternalistic propaganda posters with the aim of promoting management authority, boosting employee morale to keep production from lagging. In 1982, the “We Can Do It!” poster was reproduced in a magazine article, “Poster Art for Patriotism’s Sake”, a Washington Post Magazine article about posters in the collection of the National Archives.

In subsequent years, the poster was re-appropriated to promote feminism. Feminists saw in the image an embodiment of female empowerment and this image became a powerful symbol. The “We” was understood to mean “We Women”, uniting all women in a sisterhood fighting against gender inequality. This was very different from the poster’s 1943 use to control employees and to discourage labor unrest. 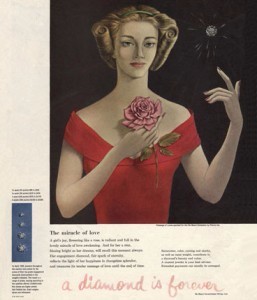 De Beers hired N.W. Ayer & Son in reignite interest in Diamonds. Not an easy feat, given that the public didn’t want and definitely didn’t need diamonds. Ayer laid out the radical notion that the campaign depended upon “the conception of a new form of advertising. There was no direct sale to be made.

There was no brand name to be impressed on the public mind. There was simply an idea — the eternal emotional value surrounding the diamond.” In 1947, the young copywriter Frances Gerety was given the brief to compose a line that encompassed and expressed the physical attributes and legends surrounding the diamond. She worked late into the night on the insanely difficult brief and, about to admit defeat, she quickly scribbled the sentence which would later be voted as the most iconic advertising slogan of the twentieth century—A Diamond Is Forever. Books and films of cult status have been named after this tagline, and a song featuring the phrase has been recorded numerous times by some of the world’s most popular artists. De Beers now owns a third of the world’s diamond supply.

Timex, Takes a licking and keeps on ticking – 1950 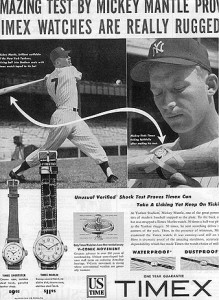 In the 1950s and 1960s, Timex, became an iconic product through it’s long-running “Torture Test” campaign that used celebrities, like Mickey Mantle to put Timex to the test.

The tests demonstrated the watches durability, shock resistance and waterproofing. In one ad, Yankees star Mickey Mantle taped the watch to his bat as he took batting practice. Other non-celebrity ads placed the watch in a washing machine or attached to the bow of a speed boat. 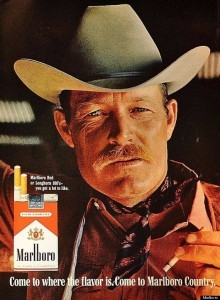 To expand the market to men, Leo Burnett created ads without mentioning filters to avoid associating the filtered cigarettes with health concerns. They decided to go with a campaign featuring various manly characters: sea captains, weightlifters, war, construction workers etc. The cowboy was supposed to have been the first in this series. But within a year after launching the character, Marlboro’s sales went from $5 billion to over $20 billion in 1957 so Philip Morris wisely dropped the remaining characters. 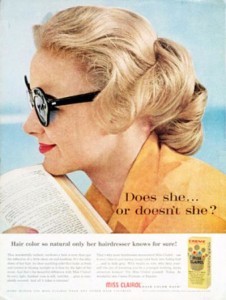 In the 1950s the common perception was that were two types of women who dyed their hair; strippers and hookers. But today, 3/4 of women dye their hair. A big part of the reason why is Clariol.

To fight the prevailing stigma at the time, Clairol’s ad agency put a junior copywriter, Shirley Polykoff on the account because she was the only female copywriter at the agency. Polykoff came up with the idea “Does she color her hair, or doesn’t she?”. Apparently, she does because Clairiol’s sales quadrupled. 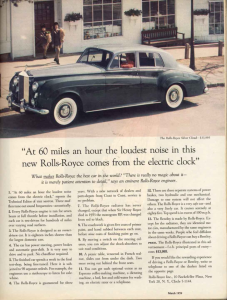 David Ogilvy is one of the greatest ad men of all time and one of his best ads is an for Rolls-Royce with the headline: At 60 miles and hour the loudest noise in this new Rolls-Royce comes from the electric clock”. One over-looked tidbit is that he may have plagiarized that infamous copy from another add (here). Regardless, the copy is an excellent example of effectively communicating a memorable and symbolic attribute of a product. 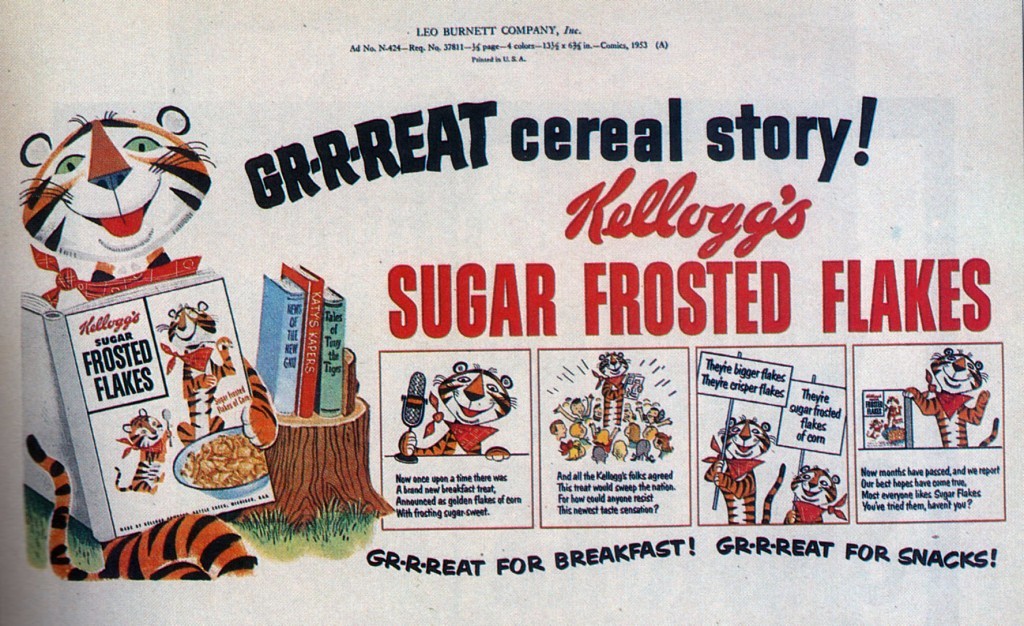 In 1951, Eugene Kolkey, Art Director for Leo Burnett, won a contest to create the official mascot of a Kellogg’s new breakfast cereal. Kolkey designed a tiger named Tony and beat out Katy the Kangaroo Elmo the Elephant, and Newt the Gnu. Tony is still going strong today. 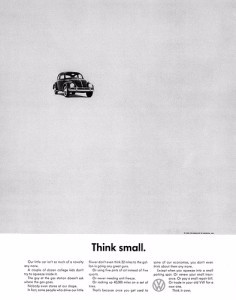 It’s hard to imagine a more difficult situation to sell a car. Cars were an American fashion statement meant to be fast, stylish and enormous. The Bettle was tiny, slow, ugly and foreign. Not only was it foreign, it was a Nazi car tied to Adolf Hitler. But the VW ads demanded attention through simple honesty.

The original ad highlighted its smallness by framing the small car in an ad with mostly white-space. The ad explained that the bug did not have a streamlined roof and was slow but it would cruise past the gas station with it’s gas efficiency. The honesty paid off by 1973 Volkswagon sold 16 million Beetles and remained the best selling car of all time until the 1990s. 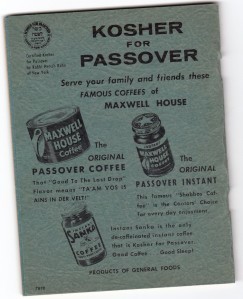 Over 90 years ago, Jews in the US celebrated the Passover holiday drank tea instead of coffee, partially because there wasn’t a coffee brand certified kosher for Passover. In 1923, Maxwell House introduced the first kosher Passover coffee.

To promote the coffee they published a Haggadah, which is a text recited on the first two nights of the Jewish Passover. They offered it for free with the purchase of a can of coffee. Today it’s the most popular Haggadah in the world with over 50 million printed. 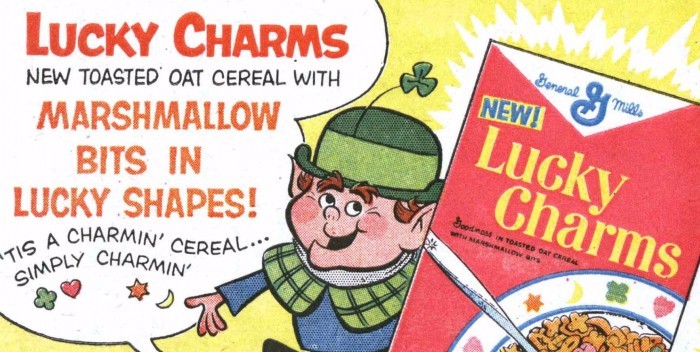 Lucky the Leprechaun debuted in 1964 with one of the most expensive advertising roll-outs to that date featuring full color ads in Sunday comics and comic books plus animated ads featuring the charmin’ leprechaun. In 1975, General Mills tested out Waldo the Wizard in New England markets Waldso as a forgetful sorcerer who misplaced his Lucky Charms and used the catchphrase “ibbledebibbledelicious” Boston kids weren’t impressed and and Waldo was dropped a year later.

These commercials were based on the obsessive grocery story manager, Mr Whipple. Because Charmin toilet paper was so soft, people just couldn’t help themselves from squeezing it. Mr. Whipple would always say “Please dont’ squeeze the Charmin!”. The punchline was that Mr. Whipple couldn’t help himself from squeezing the Charmin either. Charmin squeezed all it could out of this premise, running more than 500 different TV commercials.