Everyone loves to hate car sales people. This clever series of ads played on universal truth with humor. The character of Joe Isuzu was a compulsive liar who made absurd claims about Isuzu, like “the Isuzu Impulse Turbo is faster than a speeding bullet,” or “each Isuzu pickup is built tough, so you can drive it forever,” then he’d say “you have my word on it.” His claims were usually offset with funny text, like “he’s lying,” or “your mileage may vary.”

The ads started with a word like ‘‘Room Service,’’ and then translated it to “Australian”. Here, it meant a live chicken and a meat cleaver delivered to the hotel room. At the end of the ad a Foster’s can would appear with the label “Beer.” The ads were responsible for the rapid adoption of the beer in the US market.

A wealth, well-dressed man drives through a rolling country side in a chauffeured car when another luxurious car pulls up next to him. The window rolls down and the man ask “Pardon me, would you have any Grey Poupon?” To which the first man replies, “but of course” as he passes a jar of Grey Poupon mustard. This original classic ad led to a number of funny versions. 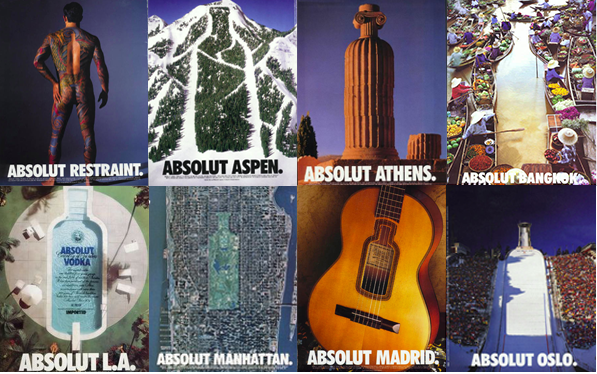 Absolut Vodka owes it’s initial success to its presence in New York’s Studio 54 back in the ’80s. There, the bottle caught the attention of Andy Warhol, who created the first of many commissioned Absolut artworks in 1986. Over dinner one night, Warhol tells Absolut Michel Roux that he’s enthralled by the artfulness of the Absolut bottle. Warhol proposes painting his own interpretation of the Absolut Vodka bottle. When Warhol was finished, Roux thought it would make a great Absolut ad. Thus launched a campaign with over 1,450 original ads and the longest-ever uninterrupted ad campaign.

Irish Spring Soap, Fresh and Clean as a Whistle – 1981

This campaign played up the brand’s “Irishness” with young men playing sports and getting sweaty. After the competition they’d say “you’re a strong man”, to which the young man would respond “a bit too strong”. A perfect segue for the deodorant soap pitch.

After Vietnam, the U.S. Army was desperate to distance itself from the images of the Vietnam War. It created the “Be All You Can Be” ad campaign to emphasize personal development rather than trying to sell patriotism. This message stuck and the Army used it for the next 20 years.

This ad featured a corporate executive frantically setting meetings, making phone calls and tracking packages. Near the end of this exhausting flurry of activity an announcer interjected “In this fast moving high pressure, get-it done yesterday world…Aren’t you glad there’s a company that can keep up with it all?” When it absolutely, positively has to be there overnight.” 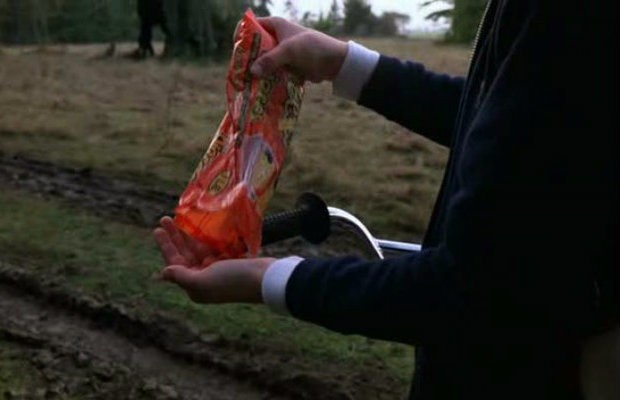 When Reese’s Pieces appeared in the 1982 movie E.T., sales nearly doubled 200%, and the underdog candy from Hershey’s was suddenly a serious competitor to Mars’ M&M’s. And by today’s product placement standards, Hershey’s paid next to nothing for it. Mars turned down the opportunity to have M&M’s appear in the movie, so Reeses’s Pieces was placed in the feature film for in exchange for $1 million in advertising for tie-ins.

In these Jell-O ads, Cosby came across as a funny, lovable father figure talking to kids. He used silly phrases like ‘Yummy for the tummy,’ ‘Thank you, mother dear,’ ‘Ummm, Jell-O pudding.’ which worked well on both kids and parents.

1984This iconic commercial was only aired on TV twice in the US. First it showed in 10 local outlets. This initial ad run was done by Chiat\Day so that the ad could qualify for 1983 advertising awards. The second time it ran was during Super Bowl XVIII. The ad opens with a dystopia, industrial setting with a group of people of lifeless faces marching in unison through a tunnel monitored by big TV screen. The heroine of the commercial gets chased by four police officers wearing black uniforms, protected by riot gear, helmets with visors covering their faces, and armed with large night sticks, she races towards a large screen with the image of a Big Brother-like figure giving a speech. 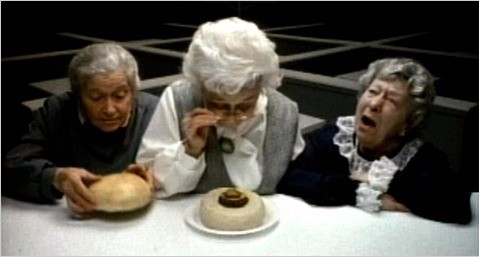 The phrase was an attempt by Wendy’s to distinguish competitors big name sandwiches from Wendy’s ‘modest’ Single by focusing on the large bun used by the competitors and the larger beef patty in Wendy’s sandwich. In the ad, a petite old lady receives a burger with a massive bun from a fictional competitor, which uses the slogan “Home of the Big Bun”. The small patty prompts her to angrily exclaim, “Where’s the beef?”

There were countless “Where’s the beef?” promotional items, including bumper stickers, frisbees and clothing patches but the phrase really caught momentum in the 1984 US presidential election. Candidate Walter Mondale leaned forward and referring to opponent Gary Hart said, “When I hear your new ideas, I’m reminded of that ad, ‘Where’s the beef?’ Mondale’s strategy succeeded in seeding doubt about Hart’s new ideas, and changed the conversation to focus on specific details. Mondale ended up securing the nomination.

The product line is well remembered for its two older characters, Frank Bartles and Ed Jaymes. They would sit out on the front porch and talk about their projects. Sometimes the folksy tone was be used in contrast with something outlandish. In one commercial the pair flew an old-fashioned plane over a beach and airdropped boxes of wine to a young partiers. The character Bartles did all the talking, and ended each commercial with the tagline, “… and thank you for your support.

The 1984 Ad “It’s morning again in America” literally shows people go to work in the morning but it was a powerful metaphor for the country’s progress in four years under Reagan’s presidency. The ad is simple, patriotic and inspiring and Regan won 49 out of 50 states in a landslide.

Mars Blackmon is a fictional character in the film She’s Gotta Have It, played by Spike Lee. In the film, he is a “Brooklyn-loving” fan of the New York Knicks and sports Air Jordans. This film led to Spike landing appearances in Nike Air Jordan commercials alongside Jordan and Mars becoming well known for his use of the phrase, “It’s gotta be da shoes.” 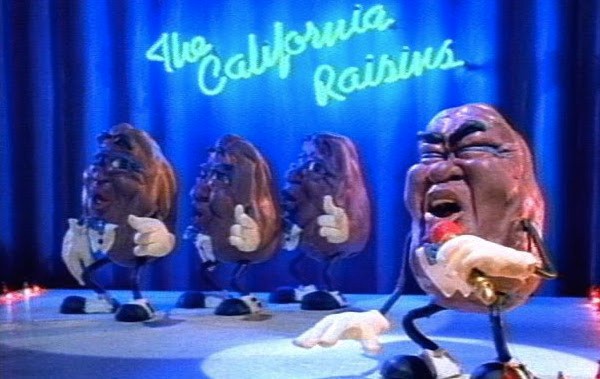 California Raisins adThe concept for the California Raisins came from an exasperated copy writer said “We have tried everything but dancing raisins singing ‘I Heard It Through the Grapevine.’” With that, the famous ad was born. It spawned mascots, four studio albums, a mockumentary, tons of merchandise and became part of pop culture.

Partnership for Drug-Free Kids, This is your brain on drugs – 1987

The only reason you might know of the Partnership for Drug-Free Kids is because of their iconic commercial “This is Your Brain on Drugs”. The ad took on a life of it’s own, with a Saturday Night Live parody “This is your brain on drugs, with a side of bacon” and mentions on the TV shows Roseanne, Married with Children and Breaking Bad. The agency managed to get air time donations estimated at $2 billion over the course of the decade.

“The “Just Do It” is one of the biggest ad ideas of all time. The goal of the campaign was ambitious; to attract all Americans regardless of age, gender or fitness level. The ads featured celebrities and regular athletes. They were almost always inspirational and very simple. The campaign allowed Nike to dominate market share in it’s North American domestic sport-shoe business, going from 18% to 43% in just 10 years.

Tom Bodett was hired by the Motel 6 because of his folksy charming demeanor. In one recording session he ad-libbed the line, “We’ll leave the light on for you”. The slogan not only made it way into the ads and after the first year, occupancy rates jumped 6%. Motel 6 has been using the down-home slogan and ad format for 50 years.

Did you know that cats used to sleep outside and would eat just about anything you gave them? Well Fancy Feast managed to change all of that when they launched a 3-ounce can of wet “gourmet” cat foot. The ads were set to classical music featured a white chinchilla Persian cat who ate out of a glass china bowl. “Your cat give you that cold shoulder when you serve cold, leftover cat food? Watch it warm up to Fancy Feast. 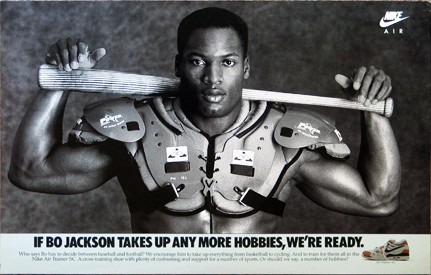 “Bo Knows” was an ad campaign for Nike’s cross-training shoes that featured pro baseball and American football player Bo Jackson. Jackson was the first athlete in modern sports to play both baseball and football in the same year. He was a perfect fit for Nike promoting a cross-training shoe. The original commercial was a hit and Nike used the format for similar “Bo Knows” ads.

Saturn was created in response to the Japanese automakers success in the US market. The emotional ads focused less on the cars and more on the town the cars were made, the people who built them and the experience of shopping for a Saturn. The ads ads were folksy and connected with the audience on a human level.

The Best A Man Can Get” was manufactured out of extensive research that revealed that men struggle with confidence. The ads capitalized on the idea that that men were looking for products to give them the confidence to perform, look an feel their best.

The famous line “I’ve fallen and I can’t get up” is from a LifeCall ad. LifeCall gave senior citizens and disabled people a pendant that would allow the user to connect with a despatch system without a phone in case of an emergency. The acting in was pretty bad and the ad came off as unintentionally funny. Countless parodies were made from the ad, but LifeCall seemed to just go with it and didn’t pull the ad.