The “This Bud’s for You!” campaign was a nod to the middle-class target. The announcer would toast construction workers, cooks, secretaries, window washers etc. with a cold Bud at the end of a long day.

This message seemed to resonate as workers were hit with a recession and rapid inflation. Over the next 10 years Budweiser doubled its sales.

To combat the dominance of the colas, 7UP hit upon a contrarian advertising strategy. They cast J. Walter Thompson as a Carribbean planter who explained the difference between cola nuts and 7UPs “uncola nuts”, lemon and lime. Mr Holder reinforced the rebellious message as he was the first person of color to be cast in a soft drink ad.

Yellowpages, Let your fingers do the walking – 1970 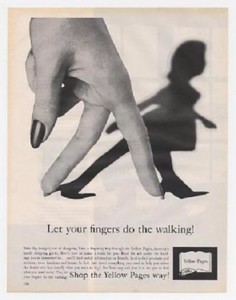 An artist drew the “Walking Fingers” symbol for the New England Telephone Company in the early 1960s. The idea was to emphasize how easy it was to use a print directory to call local businesses, rather than walking around town.

The concept stuck and while no one uses the yellowpages anymore, most people still recognize the phrase “let your fingers do the walking.”

Ad campaigns aren’t always used to push product. In the 70s, AT&T was facing political pressure for being a monopoly. To soften it’s image, they created the “Reach Out and Touch Someone” campaign, which featured emotionally stirring sense of families and friends calling each other.

Building on it’s logo of a bull, Merrill Lynch create and ad with a herd of raging bulls roaring across the screen in the 1971 world series and declared “Were bullish on America”. The patriotic appeal worked. Within two months awareness with upper-income men jumped 140 percent.

Life was brought to marketing in 1962 and was originally positioned as a healthy breakfast, which was a little crazy as most cereal at the time was packed with sugar. The brand was invigorated with an campaign featuring “Mikey”, a finicky four-year old. In the ad, his brothers are reluctant to try the cereal because it’s healthy. When they push it on their younger brother, he likes it. And they proclaim excitedly “He likes it!” The ad ran for the next 14 years, becoming one of the longest running TV ads.

Burger King came out with the Have It Your Way Campaign to differentiate from rival McDonald’s. McDonald’s dining experience was perceived to be a burger factory so Burger King emphasized it’s willingness to customize. While it’s hard to imagine anyone taking that jingle seriously, the campaign resonated with people’s desire for personalization. Burger King tried a slew of other campaigns that didn’t stick as well before returning to the Have It Your Way Campaign in 2004.

These famous commercials usually started with a Miller Lite drinker commented on the beer’s great taste followed by another who said that it was less filling. This usually led to the entire bar erupting in a shouting match. The “Less Filling” aspect of the message was a clever way of positioning the low calorie beer as a manly. With a less filling beer, you could drink more of it. Between 1973 and 1978, Miller sales exploded from 7 million barrels to over 31 million barrels, which was the most rapid growth ever recorded by a beer maker. 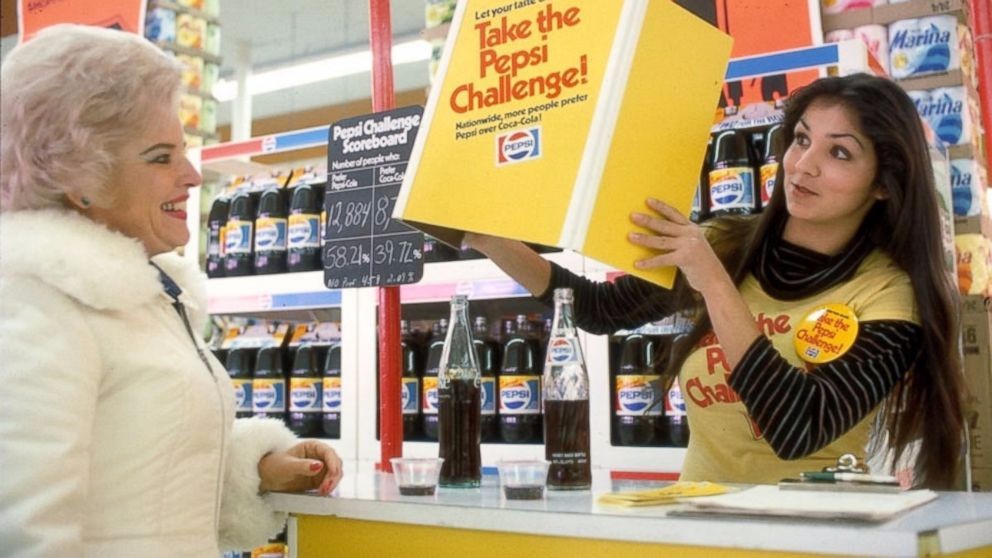 In 1975, Pepsi launched the Pepsi Challenge. They would ask people in malls and shopping centers to blind-taste two colas, one Pepsi and one Coke. Of course, everyone always preferred Pepsi. Pepsi used this campaign for the next 35 years.

The ad usually followed a single formula: The celebrity spokesperson would say “Do you know me?”. Then they’d drop hints about who they were, until the end of the ad where their name was revealed on the card and the announcer would say “American Express. Don’t leave home without it.” The idea was that, despite their celebrity status, they couldn’t buy anything without an American Express Card.

These ads weren’t clever or funny, but the simplicity and repetition worked. The actors would describe their ailment and then ask “How do I spell relief”, followed by spelling out “R-O-L-A-I-D-S”. If you ask anyone over 40 how they spell relief today, they’d probably be able to finish the ad.

These famous ads depicted people out for a run, on a train or at a party talking about the stock market. Then one person would say “My broker is E.F. Hutton. And E.F. Hutton says….” Then the remaining people in the background would fall completely silent and lean in as they wanted to hear what E.F Hutton had to say. The ads would all end with the slogan “When E.F. Hutton talks, people listen.”. People did indeed listen. E.F. Hutton became the second largest brokerage firm in the US at the time.

After a football game, a child offers an injured Mean Joe Greene a Coke. Joe chugs the Coke and starts limp away. Then, he turns back toward the sad kid, smiles and throws the kid his team jersey with the now-famous punchline, “Hey Kid, Catch!”

Apparently if a candy bar has peanuts in it, it’s a good thing to eat when you’re hungry. Snickers has successfully pulled off that idea for decades. The original snickers ads were a testimonial format where actors depicted everyday people talking about their day and why they like Snickers. Snickers stuck with this theme for years but got a little more clever. In later ads, they’d show someone in a funny situation who was irritable or tired due to hunger. Then their friend would say “eat a snickers” and the person returned to normal.

Smith Barney, We make the money the old-fashioned way—we earn it – 1979

These ads touted Smith Barney’s research and it plays off healthy skepticism of get rich quick schemes. It featured wealthy character in a posh setting, saying that Smith Barney was known for it’s hard work and proclaiming “They make money the old-fashioned way. They earn it.”